Nine Months Later, What I've Been Up To

My last entry, Generating a self-signed SSL certififcate, was made nine months ago, so what have I been up to in the meantime? I decided to take a break from software, a semi-retirement of sorts. I have been wanting to build a passive solar house, so I started on the journey to doing it.

Passive solar refers to the use of heat from the sun to provide heat for a structure. Passive solar homes use materials like rammed earth, adobe, or compressed earth blocks for walls. These materials have tremendous thermal mass, meaning that they capture and store heat energy very well. They are also very strong and, in the case of traditional adobe, have been used by people for home-building for thousands of years.

Passive solar homes also use large south facing (in the Northern Hemisphere) windows to bring light and heat into the home during the day, where it is stored by the thermal mass of walls and floors and released at night, keeping the structure warm long after the sun has set.

Over the summer, I started clearing a piece of land I own in New Mexico. On the building site I chose, there had been an old turkey farm. What was left was a tremendous amount of debris, concrete rubble, and trash from decades ago. I spent the summer into the fall removing debris and rubble, getting the site ready for my construction project.

At the same time, I researched building techniques and materials, submitted plans for the house, and acquired tools I would need for the project. A small tractor might seem like an extravagance, but with a handful of attachments- backhoe, loader bucket, pallet forks, and box blade, I have a great set of tools for the construction process.

Tack on a hydraulic press to create compress earth blocks (CEB) and I'm off and running. 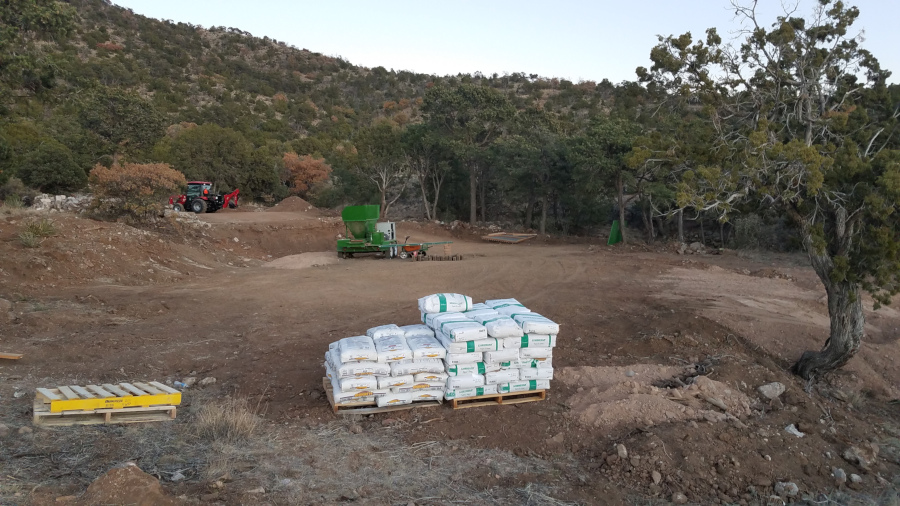 Above you can see the result of several months of demolition, debris hauling, excavation, filling with dirt, and grading. On the left behind the shrub you can just see a pile of concrete rubble, what was left of hundreds of feet of wall and the ruin of the concrete barn. Using a loader, my 15K dump trailer, and my truck, I made roughly thirty trips to a company called Vulcan Materials that recycles waste concrete. Probably 60 cubic yards of material - that was quite a job.

In case you were wondering, no, this isn't the first time I've built anything. My father built homes for many years when I was younger, and I spent some time helping him build. I learned carpentry and the construction process along the way. However, building with earth was new to me, so I read as much as I could and got my hands dirty to see what was involved. I'm still learning, and the project is ongoing, so expect to see some updates as I move toward a completed home.