First Impressions of the Pine64 Beta 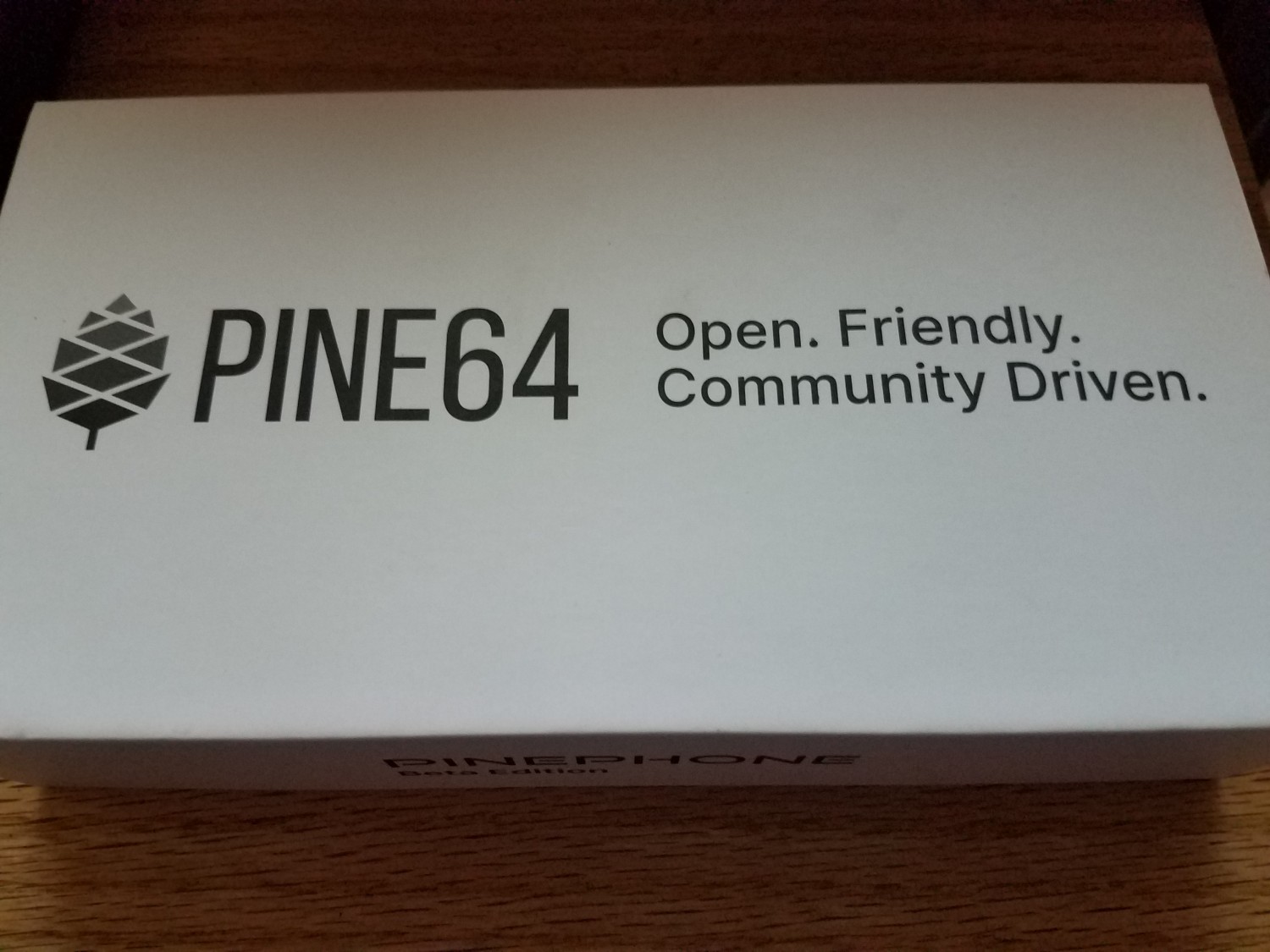 I got my Pine64 beta Convergence Edition a week ago or so, and I’ve used it enough now to give my first impressions and provide some ( hopefully ) useful feedback for the developers working on Manjaro Plasma for the Pine64. I’m not going to cover much about the Pine hardware itself, I am more interested in helping drive improvements in the software to push Pine64 ( and other hardware ) toward consumer-ready status.

As you may have guessed from the previous paragraph, or from the beta status of the Pine64, the phone is not ready for general consumer use. I’ll note that I also have a Oneplus3T running UBPorts, and while UBPorts has made some good strides in the last several months, it suffers from many of the same issues as Manjaro Plasma.

The developer community has been excited for months about the Pine64 beta, and the phone overall does not disappoint. While many issues remain to fix before Pine64 or Manjaro Plasma can be considered consumer-ready, the engineering team and developer community have done a great job with this phone. If you don’t understand why a not-yet-complete product deserves kudos, consider that the two major phone OS choices - Android and iOS - were developed by two of the biggest technology companies in the world at a cost of billions of dollars each. That’s the effort level that groups like Pine64 and Manjaro ARM are trying to match, and yes, they deserve kudos for their efforts. Now let’s look at some specifics about the phone.

First, my only quibble about the hardware is the placement of the SIM card under the SD card inside the phone case. The case itself is no big deal, it’s actually the friendliest to open phone case I’ve ever seen. My issue is the difficulty in inserting and removing the SIM card, especially for micro-SIMs that need the provided adapter. 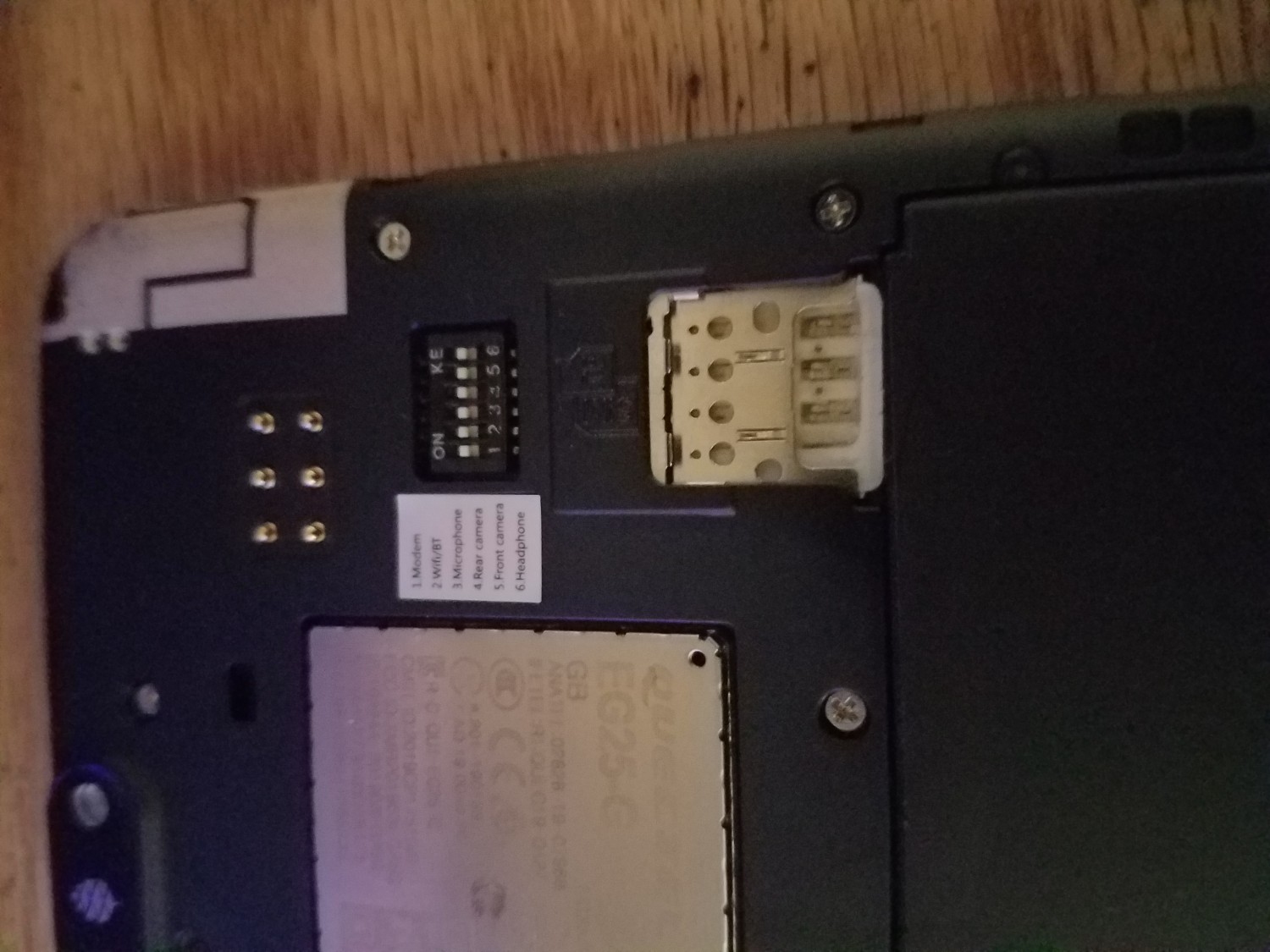 In order to insert or remove the SIM, you need to remove the battery, and then you need to position the adapter and SIM perfectly in line and nudge the card into position without dislodging it from the adapter. I managed to do it with a computer repair toolkit, but not everyone has access to specialized tools like that. Removing the card meant using the needlenose tweezers from my kit and pulling gently to prevent damaging anything.

I realize the hardware is considered baked at this point, but it might be a consideration for the future to make accessing that slot a little bit easier. Just a thought.

The Home screen looks very nice, and it works well enough. By default, you see the Phone, Phone Book, and Angelfish Web browser, along with an arrow to slide up the apps menu with a click. 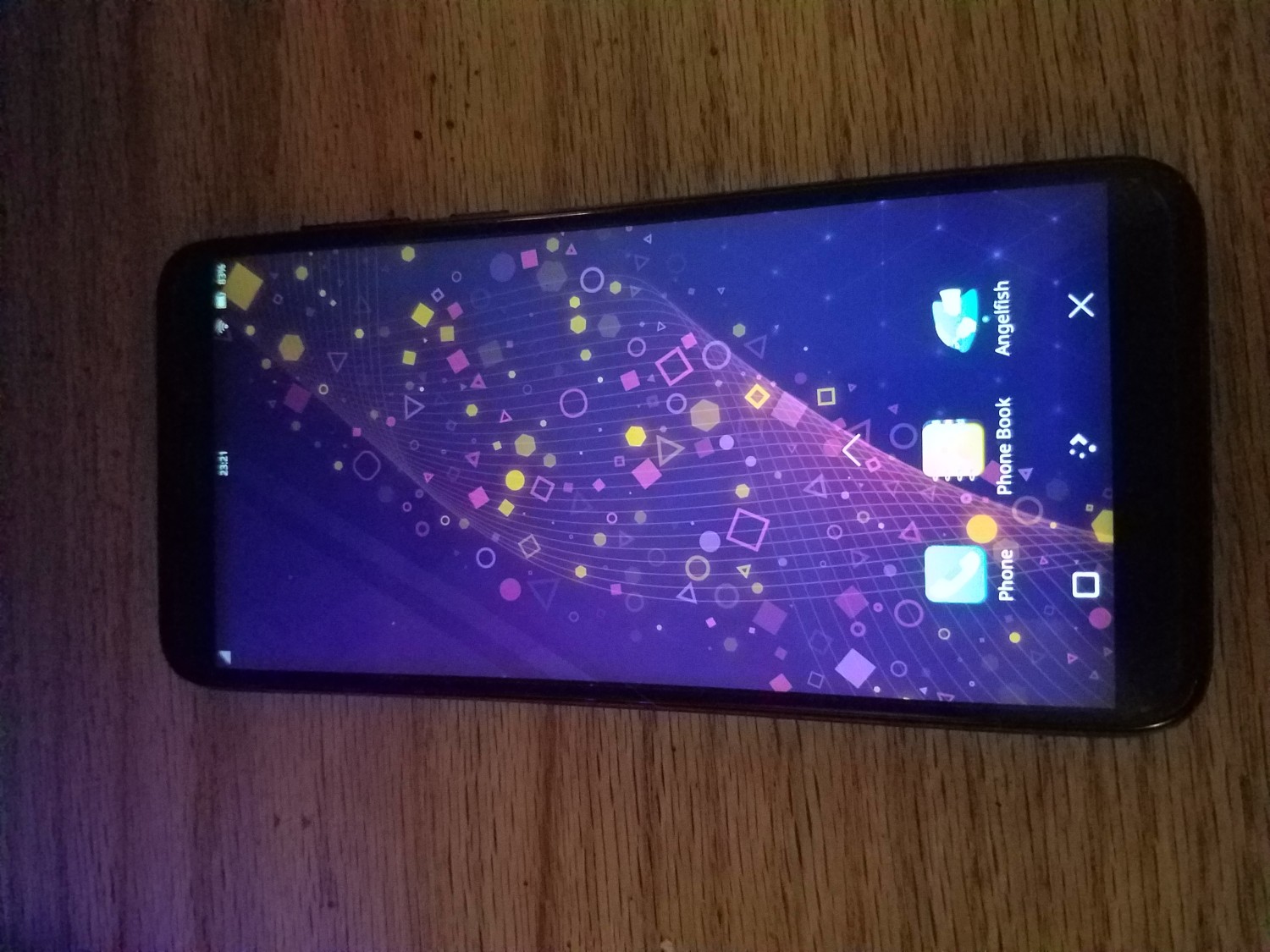 You also get typical indicators for a phone - a clock, Wifi, Bluetooth, Network, and battery life indicators at the top of the screen. In the top left is a folded corner icon that we’ll get to later.

Opening the apps menu, you will see a decent number of pre-installed applications, though it is not clear by their names exactly what all of these apps do. Some ( Calculator, Settings ) are clear, others ( Megapixels - the camera app, Discover - the software gallery ) are not so. 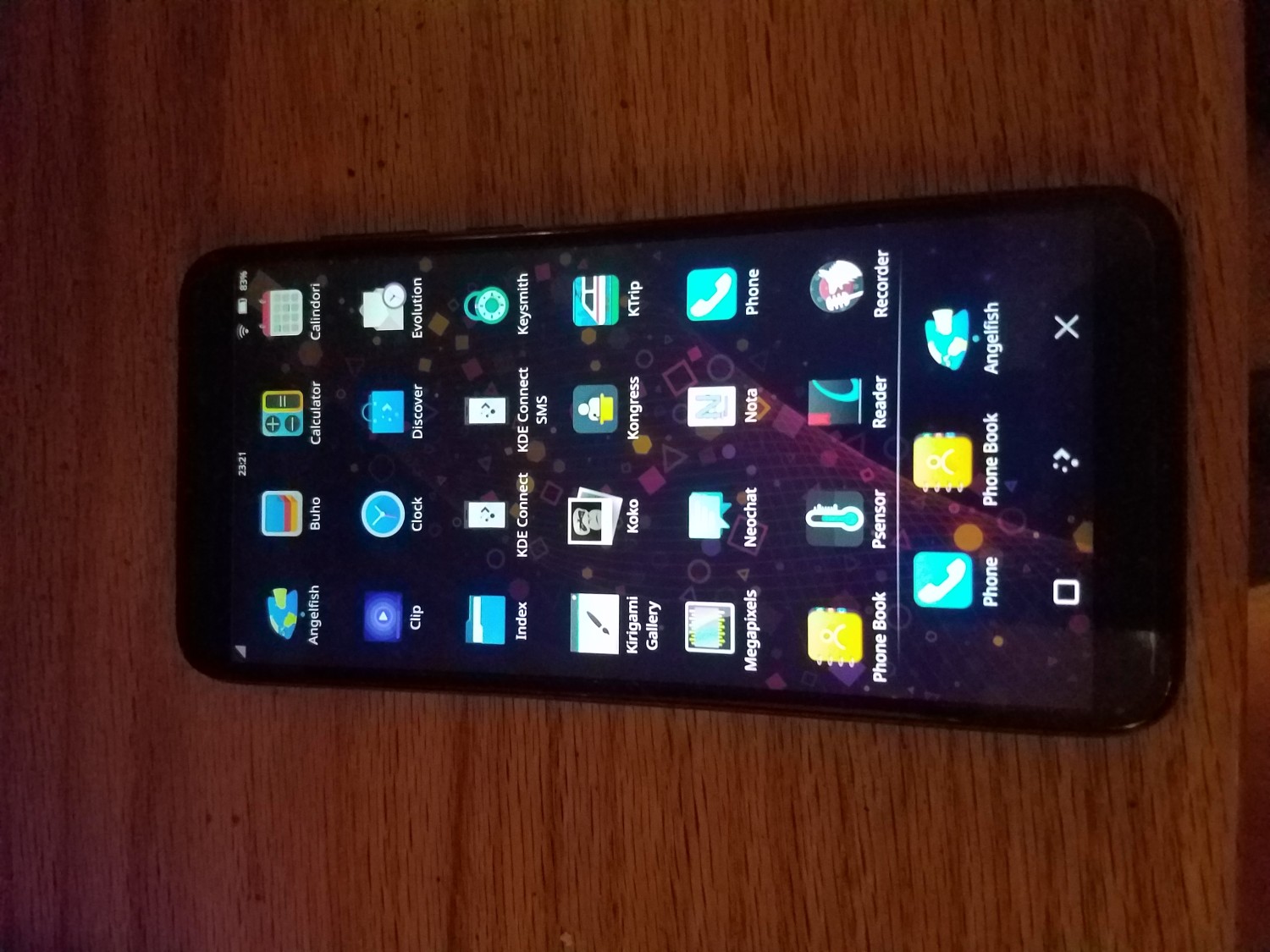 Call it what it is, folks. Consumers don’t want to play “guess the app functionality”.

Timeout and The PIN Screen

Easily the biggest annoyance so far is the speed with which the phone turns off the screen, forcing you to touch the screen again in the hopes of getting the display back, or being forced to press the power button, only to come back to the PIN screen and be forced to unlock your phone again. This has happened entirely too many times in my short experience with Manjaro Plasma. 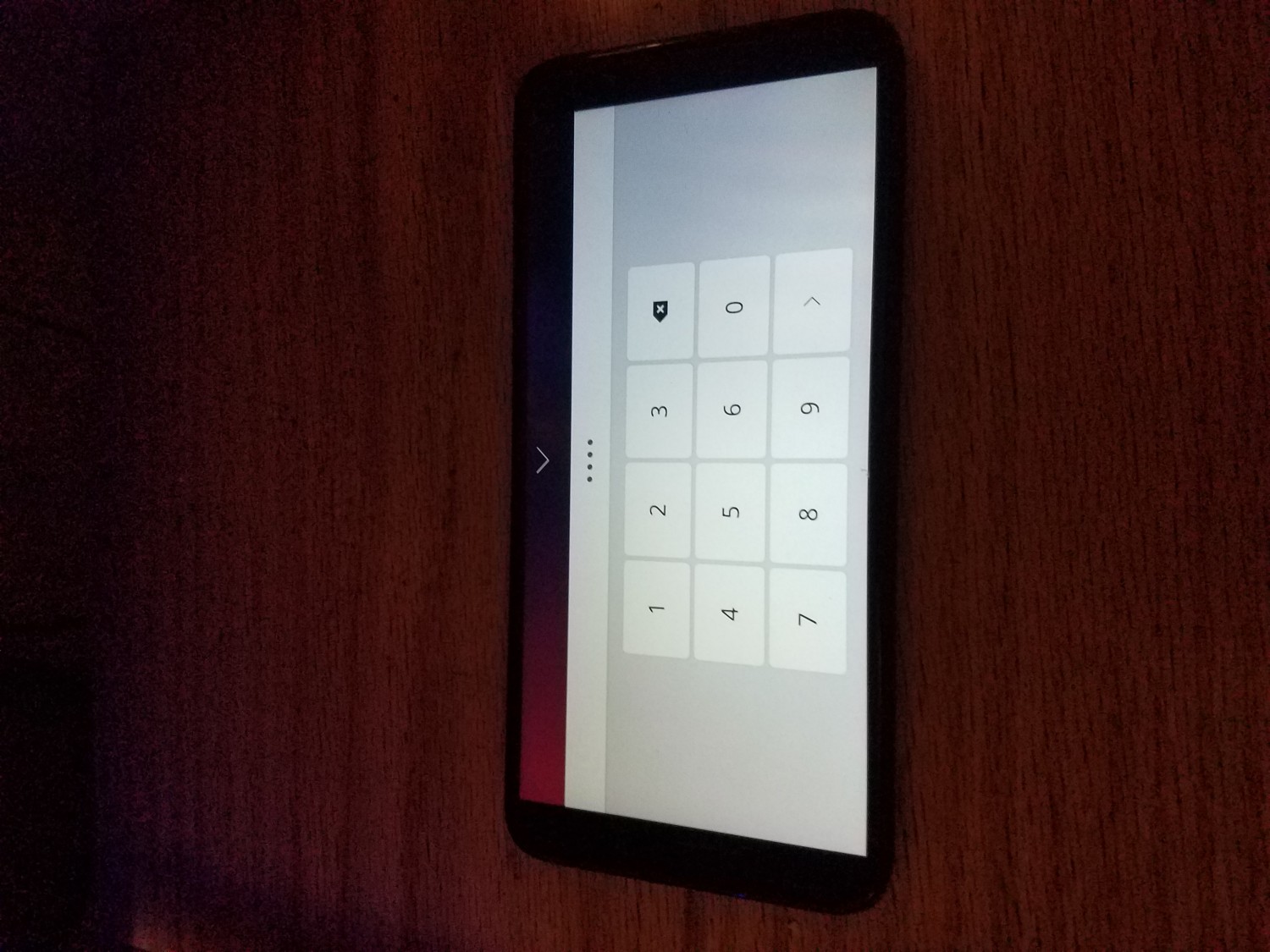 You’ll be seeing this screen a lot.

Maybe there is a way to change the settings for the timeout value or sensitivity that turns the screen off, but I couldn’t find it in the Settings app. Someone will probably say RTFM in response. Well, that’s fine for developers, but again, not OK for a consumer device.

So far, app functionality has been a mixed bag. The Phone app works as you would expect, as do Phone Book, Angelfish, the Calculator, and several others.

Megapixels, the camera app, shows odd colors on the live preview in my limited use, but it takes reasonably good photos with the correct colors. Front and back cameras are functional. Settings in the camera are not active yet and it’s clear that the app is still under development, progress looks good.

Discover, the software gallery, also seems under development. The main screen of the app has a list of Featured apps that are mostly irrelevant to me, and a Search icon to search for new apps. The good news is that, since we’re dealing with Linux, there are a wide array of apps available in Discover for free installation. 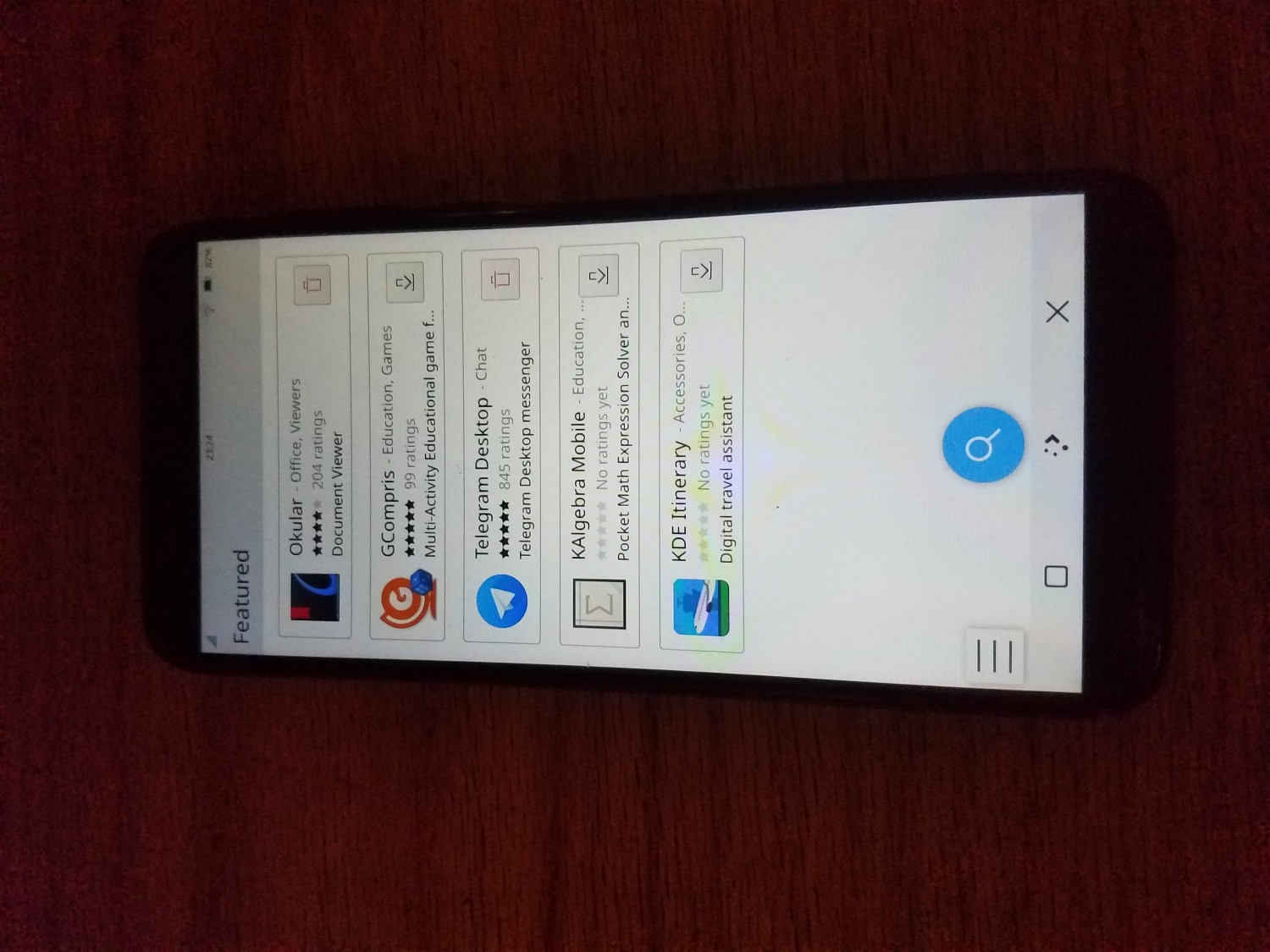 The bad news? Apart from 1-5 star ratings and individual reviews, there is little to indicate which apps are ready or appropriate for mobile use. Is there a default email app? That seems like a no-brainer for a phone, but I don’t see one. I could be wrong, but again, if it isn’t called “Email” or something equally clear, there might just be a problem. Sorting/indexing apps and providing mobile-friendly recommendations would be a good step in moving the ball in the Discover app. 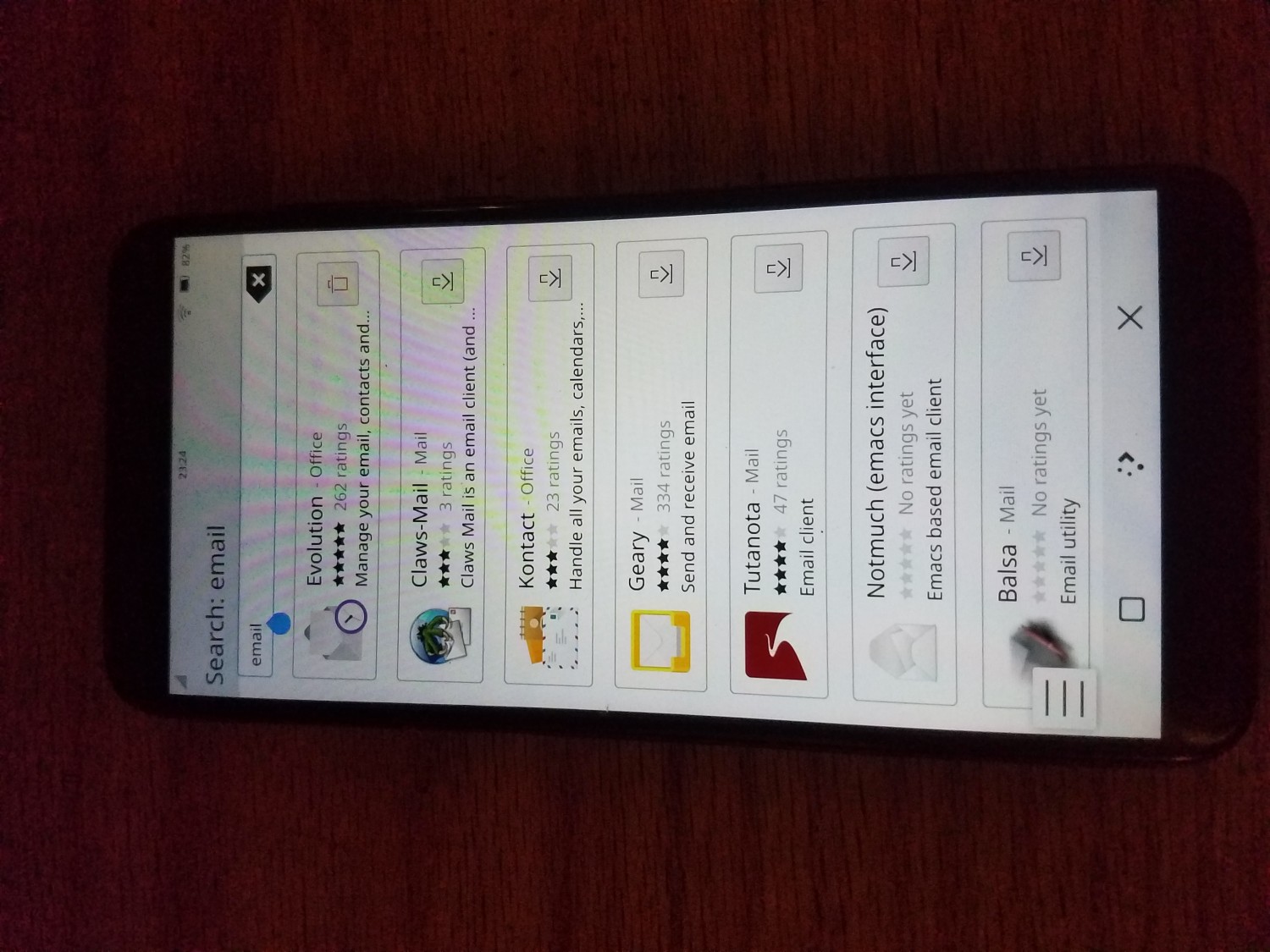 Searching for an email app brings up any number of possible options, but again, no clear winner or default app for the phone. I use Evolution on the desktop, but the UI just isn’t suited to a mobile screen. Convergence might be the solution for some users, but I need to check email on the go without access to a big screen, and I need an app that works with the Pine64 screen.

Deleting the “email” search term from Discover revealed a problem that affects a variety of apps in Manjaro Plasma. I was left with a blank page and the onscreen keyboard engaged for me to search for something, but I just wanted to go back to the main screen of the app, or the Home screen of the phone, and I couldn’t because the buttons at the bottom of the screen to exit, minimize the app, or tab between apps were hidden. 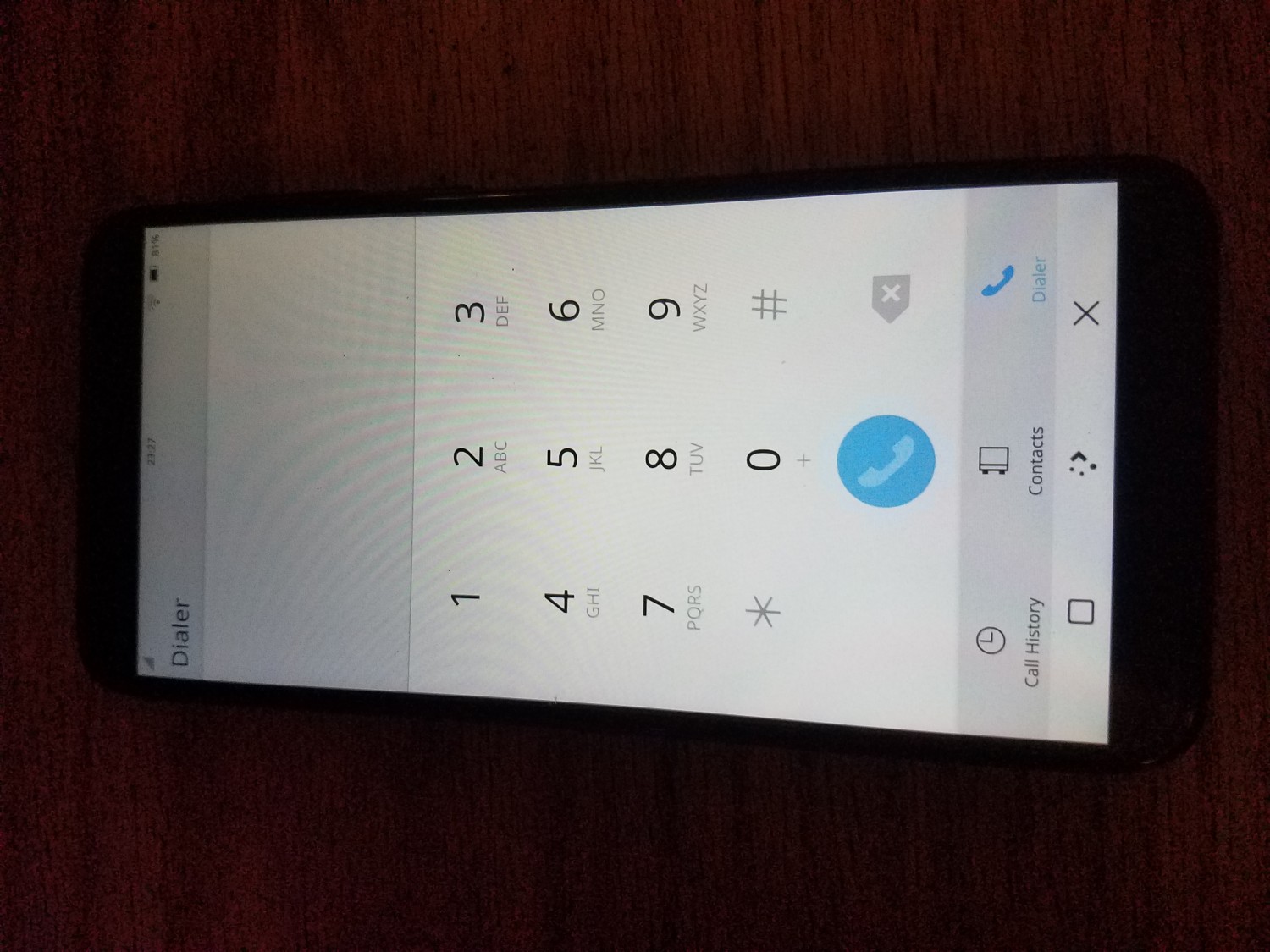 FYI, my main phone is a Galaxy S7, and I love the dedicated buttons at the bottom of the phone screen for just this reason. You should never lose the ability to navigate, that’s UX 101.

Remember that little folded corner icon in the upper left of the phone? Well, here is where it comes in handy. Clicking that icon hides the on-screen keyboard. However, when the cursor is focused on an input like the Search box in the previous screen, the keyboard pops right back up after a second, hiding the navigation again. I was able to get back Home by clicking the corner icon with one hand and quickly clicking the close (X) icon in the bottom right with my other hand.

I don’t know the ultimate solution to this problem, but my suggestion would be to make a quick and easy way to show/hide the keyboard that disables automated state change until turned off. Maybe that corner icon would suffice. I don’t know enough about the OS internals to begin to guess what it might take to do something like that. I will note that UBPorts has a similar issue on my OnePlus 3T, though I haven’t checked lately whether it is fixed or not.

The best way to look at the current state of the phone is to note that it has rough edges in the software department. The Weather app, for instance, works well overall, but I have trouble pulling up the menu and selecting a location. I don’t know what the issue is there, but it seems like a common system issue with clicking on the menu icon in an app. 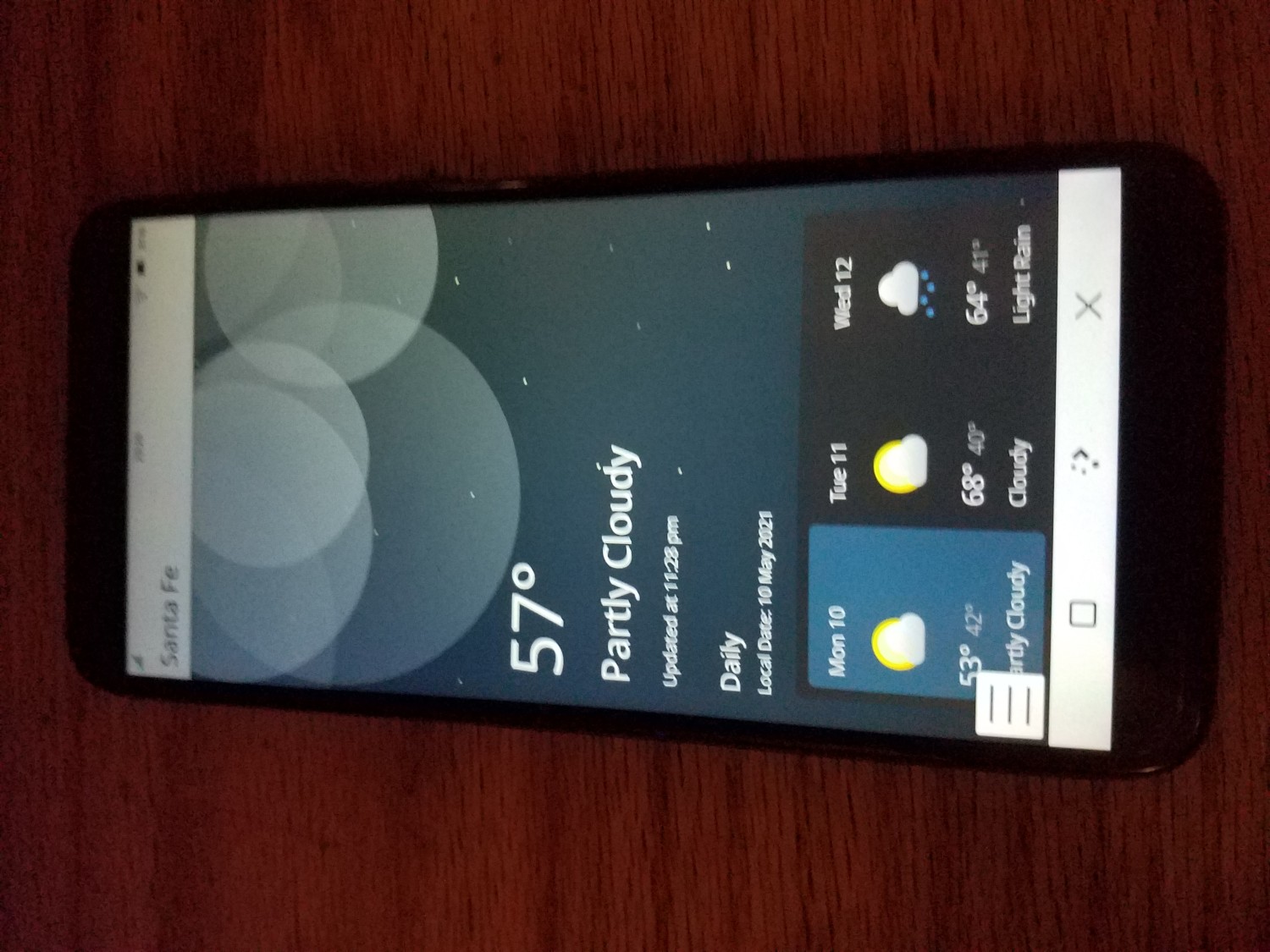 Other issues include the regular reporting by my phone while I had the SIM in it that it had lost Network service. The notices piled up in the system menu and were too difficult to get rid of. Things like this are solved problems in Android and iOS, so it’s just a matter of time before developers get them right.

My first impressions may seem a little rough, so I want to reiterate how impressed I am with what the engineers and developers have done with this product and with open source phone development in general. Microsoft spent billions on their phone efforts, made great phones, and got nowhere in the marketplace. Phone development is as tough as it gets in the consumer space, and it is very encouraging to see how much progress has been made. Based on what I’ve seen, I expect there to be truly consumer-ready Linux phones, including Pine64, in one to two years.